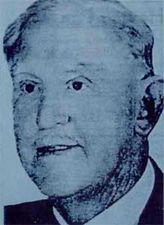 Gosford Public School is very fortunate to be on of the recipients of the Chapman Trust. Every year, our school allocates the significant financial support from his bequest for the specific for his specific request,

"the promotion and encouragement of education in our school."

When walking around Gosford Public School you will see the ‘CHAPMAN Community Room‘ and the ‘A.I. & E.H. CHAPMAN LIBRARY‘. On our School Presentation Night held at the end of each school year, one student from every class is selected to receive a ‘CHAPMAN AWARD‘.

Just who are the CHAPMANS?

Mr Alfred Ingram Chapman and his wife, Mrs Ella  Hope Chapman were long time residents of the Gosford/Wyong District. Despite not having any children, Mr Chapman was an active member of the Gosford Primary School Board in the early 1900's.

Gosford Public School is indeed very fortunate to receive such a bequest and is extremely grateful to both Mr and Mrs Chapman's generosity in perpetuity.

When you next visit the School Chapman Room please peruse our framed commemorative piece dedicated to the memory of Mr A.I. Chapman & Mrs Ella Hope Chapman, created especially to reflect on just a little of the life of Gosford's Greatest Individual Benefactor.

Profile of a Public Benefactor

The Chapman family were Pioneers of the District of Gosford, later moving to Wyong. Mr Chapman Snr. had instilled in his son Alfred Ingram, likewise an obvious passion for caring deeply for the welfare of the community, working hard to forge ahead to make our Central Coast districts known as progressive ones.

Alfred Chapman was the youngest of six children born to William John Chapman and his wife Grace (fomerly Cavanagh). Older siblings included Owen, Emily Grace, William Arthur, Clement, and Winifred Blanch. His birth in 1881 was the same year his father opened the first of the Chapman General Stores to trade in Mann Street, Gosford. The site is occupied today by Wheeler House & the Westpac Bank, not far from the corner of Donnison Street.

About 1912, a Chapman & Sons store re-opened for business in the township of Gosford, in premises previously owned by Fred Cox. Part of this land is now occupied by the old and vacant Sydney County Council building (opposite the Gosford City Council Chambers).

Unfortunately, some fifteen years after re-opening the Chapman and Sons Gosford Store burnt down on 18th August 1927, never to be rebuilt. Despite never rebuilding his business, Alfred Chapman continued to pay his employees their wages. 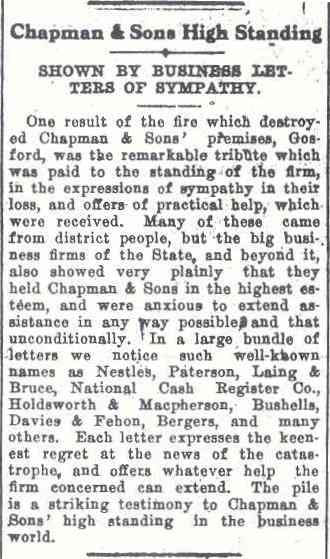 Alfred, now aged 46 years, and with no Gosford district Chapman and Sons store continued to possess exemplary business prowess and made wealth of his own accord from widespread financial interests, which included investments in the stock exchange and the property market.

Alfred Ingram Chapman known as ‘Fred' died on 24th June  1963. In June of that year it was learned that selected District charities were to benefit from his large estate.

Under the terms of his Will that was signed on 12th January 1961, (only two years prior to his death) any money from Mr Chapman's Estate was to be invested. This foresight was repaid. From a modest original estate and after distributions to the beneficiaries for thirty years, the trust in 2008 is now valued in the tens of millions.

What kind of man was A.I. Chapman, our Public benefactor?

He was a wealthy man who inherited property from his father and with great foresight made money of his own accord from widespread financial interests, which included investments in the stock exchange. He also owned property in Gosford and Wyong stretching to Watanobbi and the Mangrove Mountain area and including the current Central Mangrove Public School site.

People acquainted with A.I. Chapman claim that he was an eccentric, complex and puzzling character. He was given to bursts of great generosity, usually under the cloak of anonymity.

Chapman fought long and hard and sometimes bitterly, for what he saw as his and others rights. He had many an argument with a number of people and establishments. He was vocal with the local Gosford Council and wrote to the paper on a number of occasions. He supported the underdog, but always remained aloof and made few real friendships.

He was an astute businessman yet, his personal lifestyle was frugal and became more so in old age. He lived in an old unpainted house at the corner of York St and Masons Parade now the site of home units until ill health forced him into a private hospital at Killara, where he died on 24th June 1963.

The Chapman beneficiaries are:

The three original trustees are now deceased. As of 2008, the current Trustees are Mr.Kevin Booth, Mr.Frank Cross, and Mr David Booth. The estate was originally administered by Burns Philp Trustee Company Limited.

The A.I. Chapman commemorative hand calligraphed piece is mounted on a wall located in the Gosford Public School Office Foyer as a memorial to the ‘greatest charitable benefactor the district has ever known'.

Mr and Mrs Chapman have provided Gosford Public School with untold educational wealth, benefiting all the children who walk through these corridors. From the early 1960's, to our current year and beyond, we are indebted to them for their financial assistance and support from their generous legacy.

Return to top of page

We would like to pay our respects and acknowledge the traditional custodians of the land and also pay respect to Elders both past and present.

Copyright for this website is owned by the State of New South Wales through the Department of Education. For more information go to https://www.dec.nsw.gov.au/footer/copyright.